Singing With Your Eyes Closed 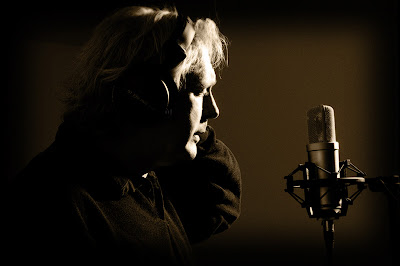 When I was growing up one of my musical hero's was Rick Nelson. Every week on Ozzie and Harriett he would appear with his band (including guitar legend James Burton) performing a song. Rick was the first person I ever saw sing with his eyes closed.

Recently, I viewed some Rick Nelson clips on Youtube.com and sure enough there he was singing with his closed. It doesn't look to me like he was doing it for effect. It looks like he was getting into the music and didn't want to get distracted. But who knows... maybe the bright TV studio lights hurt his eyes.

Anyway, that's where I learned to sing with my eyes closed. Another Rick Nelson fan who sang with his eyes closed was the late Townes Van Zandt. A fan once asked Townes why he sang with eyes closed and in true Townes-speak he answered, "If the audience would all close their eyes, then I wouldn't have to close mine."

Over the years I've found that when I close my eyes it allows me to get deeper into the song. Be warned though that this form of intense concentration is not without it's hazards. As an example I remember one night when I was singing in the bar at the Santa Fe Hilton. I had my eyes closed while singing Gentle on My Mind. Just as I was conjuring up an imaginary campfire scene by a desolate bit of railroad track I felt a hand on my shoulder. A very drunk bar patron had wandered up on stage. I snapped out of my reverie and looked him straight in the eye. He responded by asking for directions to the Albuquerque airport.

I wonder if Rick Nelson had to put up with stuff like that. Probably not. TV audiences were no doubt restricted from walking up on stage during a performance. I did meet Rick Nelson once at a party as Billy Al Bengston's Venice, California studio. He was a nice guy and seemed as glad as me to find another musician at among the stuffiness and pretension of the L.A. art crowd.

I'd like to think that if Rick had been on stage at the Hilton that night he would have done what I did... I gave the customer directions to the airport... then I closed my eyes, called up the image of my lost love, and sang the rest of the song... "I dip my cup of soup back from the gurgling, crackling cauldron in some train yard. My beard a roughening coal pile and a dirty hat pulled low across my face. Through cupped hands 'round a tin can I pretend to hold you to my breast and find. That you're waving from the back roads by the rivers of my memory ever smilin' ever gentle on my mind."
Posted by Alan Acuff at 12:45 PM 4 comments: